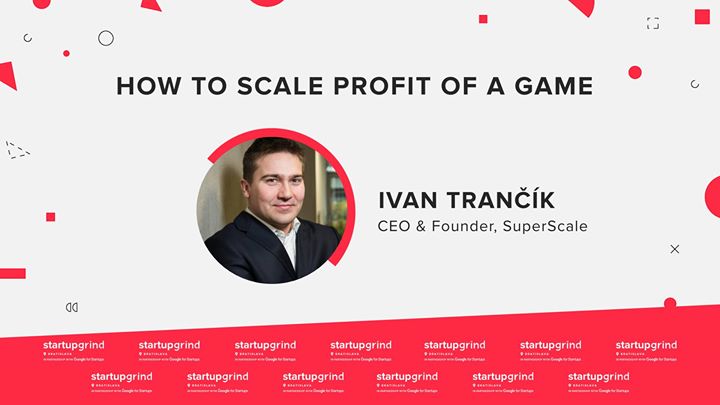 With $180 billion projected revenue, the gaming industry is the largest sector of the entertainment industry – bigger than Hollywood, music, and sports. ?

? How are gaming companies making money?

? How much more they could be making thanks to big data?

? How to build the company out of Slovakia that is able to scale profits of the biggest gaming companies in the world?

Come learn to Startup Grind Bratislava, where Ivan Trancik,
CEO and Founder of SuperScale (Deloitte Fast 50) and Forbes 30 under 30, will share his insights in the Gaming and Big-Data industry in the 21st century ??.

✅ Speaker:
Ivan is an entrepreneur, game growth-hacker and CEO & Founder of SuperScale. Following his true passion – helping worlds best game developers to scale their games under their own brand – Ivan founded SuperScale.

? With his team at SuperScalee, he helped to scale over 100 games with more than 2 billion downloads on mobile combined and over 20 million sold copies on PC/Console in total.

? SuperScalee works closely with leading fast-growing game studios around the world such as Fingersoft, Frogmind, Pixel Federation and many others, helping them to analyze hundreds-of-millions players on their flagship titles in the process.

? He also co-founded a scalable real-time analytics platform Infinario (now Exponea) that was expanded into e-commerce marketing cloud by his co-founders with a current headcount over 300 while attracting over 20 million EUR VC capital to-date. Ivan often speaks at various conferences about game business analytics, game growth/retention hacking all over the world.